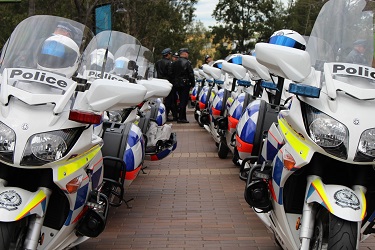 Our partnership with the NSW Police Force involves many projects to improve road safety. These include high visibility enforcement to reduce speeding, drink driving and drug driving, as well as other safety risks such as fatigue, mobile phone distraction and non-use of seatbelts.

High visibility Motorcycle Response Teams were launched in 2012 in the Sydney CBD and 2013 at Parramatta, targeting known trouble spots and helping to ease traffic congestion and reduce dangerous behaviour.

Work continues to provide the teams with resources to support their interactions with motorists and pedestrians, including material in multiple languages when officers are in known culturally diverse locations.

The Enhanced Enforcement Program is another of our partnerships with the NSW Police Force. Our funding improves the level of visible police enforcement to help target road user behaviour that causes road trauma. This includes speeding, drink driving, drug driving, fatigue, illegal use of mobile phones and non-use of seatbelts. Enhanced enforcement operations are also supported with public education campaigns to target the main behaviours related to crashes in NSW.

The Traffic and Highway Patrol Command carries out statewide operations each year. Funded through the Enhanced Enforcement Program, the operations usually coincide with double-demerit point periods. They are run during long weekend and holiday periods, as well as annual operations in February and November. Statewide operations provide high visibility enforcement, usually on major routes, at times when there are more commuters on NSW roads.

Since Random Breath Testing (RBT) started in 1982, fatal crashes involving alcohol have dropped from about 40 per cent of all fatalities to levels of around 15 per cent. RBT is central to reducing alcohol-related deaths and injuries. In 2017, the NSW Police Force conducted almost five million breath tests, resulting in more than 18,000 charges.

The Mobile Drug Testing (MDT) campaign is the first in NSW to target the drug driving issue and supports the increase in mobile drug testing being delivered by the NSW Police Force. MDT detects drivers who have recently used four common illegal drugs: ecstasy, cannabis, cocaine and methamphetamine (including speed and ice).

MDT operates alongside RBT for alcohol, with police also having the power to test drivers they believe may be under the influence of illegal or prescription drugs. MDT is increasing in NSW, with police undertaking up to 200,000 roadside drug tests each year.