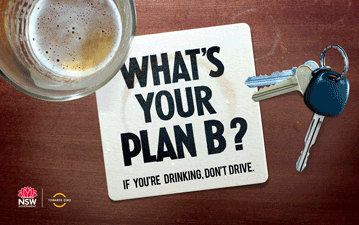 You need to plan ahead to get home safely after a night out – if you've been drinking, don't drive.

Motorists across the state are being urged not to drink and drive this festive season. Until 29 January, 2022, patrons at more than 300 participating pubs, clubs and bottle shops can enter a competition to nominate their Plan B for getting home.

Each entry will go into the running to win one of hundreds of swags, valued at more than $250 each.

The Plan B drink driving campaign began in August 2012. It is about making positive choices to get home safely after a night out, highlighting that driving is not an option. With practical options to avoid drink driving, Plan B takes a positive approach designed to engage the community about making alternative arrangements to get home after a night out. The campaign emphasises that police mobile random breath testing (RBT) operations can happen anytime, anywhere.

Drink driving is one of the biggest causes of death and injury on NSW roads. In 2019, there were 61 people killed and 285 people injured in crashes involving drivers who were over the legal blood alcohol limit. Men make up 87 per cent of drink drivers involved in fatal crashes.

Although the Plan B campaign reaches all drivers, it is aimed at male drivers aged 17–49 years, who are over represented in all alcohol-related crashes.

The main message of the campaign is if you are drinking, don’t drive. You need to have a Plan B to get home. Other campaign messages include:

The Plan B campaign has a heavy emphasis on point-of-behaviour messaging in licensed venues where people are making the critical decision about whether to drink and drive. The campaign leverages advertising channels such as outdoor (taxi backs and in-venue/pub advertising) as well as radio and social media.

The campaign aims to: