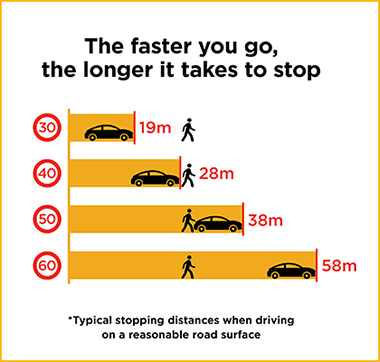 We support lower speed limits in built-up areas to help reduce pedestrian fatalities and injuries. Travelling at lower speeds improves a driver's ability to stop and avoid crashes, especially in areas of high pedestrian activity. Where crashes do occur they are less severe, especially for children and the elderly.

Even a small difference in vehicle speed can make a large difference to the danger of serious injury. If a car hits a pedestrian at 50 km/h, the driver is twice as likely to kill the pedestrian than if the car had been travelling at 40 km/h.

Many factors affect stopping distances, including:

To reduce the risk of a crash, drivers should stay under the speed limit and drive to the conditions, such as slowing down in wet weather or poor visibility.

The 40 km/h urban limit is part of a nationwide strategy to improve safety in high pedestrian traffic areas, such as busy CBD zones and small suburban shopping strips. The 40 km/h limits are also marked on signs to show local traffic zones and road work zones. Signs and pavement markings show the start of 40 km/h pedestrian areas and include:

Most 40 km/h pedestrian zones are requested by local councils, community, police and transport authorities and submitted to local traffic committees. Our guidelines assist in the implementation of timed 40 km/h speed limits at schools, on buses (as flashing lights on the back of buses) and 40 km/h roadwork zone speed limits.

A 50 km/h speed limit applies to all built-up areas across NSW. Built-up areas have buildings on the land next to the road, or have street lights along the road with a spacing of 100 metres or less for a total length of at least 500 metres, or if the road is shorter than 500 metres, for the whole length of the road.

The NSW Speed Zoning Guidelines (PDF, 2.04Mb) provide details on the consistent application of engineering principles to speed zones across the state.