Drink driving is a serious offence. It is also an offence if you refuse to take a breath test. Penalties can include loss of licence, fines, prison terms and a requirement to install an alcohol interlock device.

As part of the Road Safety Plan 2021, penalties were strengthened to further deter drink driving and reduce alcohol related trauma on NSW roads. Changes include:

Importantly, since 20 May 2019, if you are caught drink driving over the legal limit in NSW, even if it’s a first-time or low-range offence, police may suspend your licence immediately – because drink driving has no place on our roads.

Further information about offences and current penalties for different drink-driving offences can be found on the Transport for NSW website.

Swift and certain loss of licence for lower-range offences

Drivers who commit a lower-range drink-driving offence for the first time will have their licence suspended immediately, effective for three months. This will be coupled with a significant fine (currently $587).

Further information about the drink driving reforms for low range offences can be found on the Transport for NSW website.

Similar changes are also being implemented to simplify and improve the certainty of penalties for first-time offences involving drugs and driving.

An interlock is an electronic breath testing device connected to the ignition of a vehicle. It prevents the vehicle from starting if alcohol is detected. The interlock also includes a camera and takes a photograph of the person providing the breath sample to reduce the risk of a driver circumventing the program.

All drivers convicted of high-range, repeat and other serious drink-driving offences in NSW committed on or after 1 February 2015 are required to have an interlock installed. 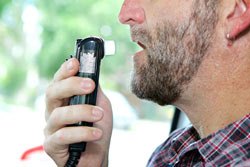 As part of the Road Safety Plan 2021, the NSW Government expanded the interlock program so that it also applies to drivers convicted of all middle-range drink driving and driving a motor vehicle under the influence of alcohol offences committed from 3 December 2018 and high range and repeat offences.

For all offences that require a mandatory interlock, the court orders offenders to complete:

The length of the licence disqualification and interlock period vary depending on the type of offence. Longer periods apply for the most serious offences.

A survey of the NSW community, completed to inform the development of the Road Safety Plan 2021, found 84 per cent of people felt alcohol interlocks for drink-driving offenders were important for road safety.

The Transport for NSW website has more details about the Alcohol Interlock Program, including information for offenders, as well as medical and legal professionals.

Research shows that the combined use of illicit drugs and alcohol increases the risk of a fatal crash by 23 times.

The combined offence is designed to deter this high risk behaviour and send a clear message to drivers that they are putting themselves and others at significant risk when mixing alcohol and drugs with driving and this behaviour will not be tolerated on NSW roads.

This new law targets those with the highest road safety risk and repeat offenders. This includes drivers who are detected with:

Penalties include increased fine levels and increased minimum disqualification periods. If the offence is a second or subsequent offence within five years, penalties are about double that of a first-time offence.

Alcohol interlocks will be mandatory for people convicted of a combined drink and drug driving offence. Vehicle sanctions may also apply.

To view the penalty framework, visit the Transport for NSW website.

Vehicle sanctions, such as impounding a driver’s vehicle, are designed to improve road safety by removing high-risk drivers from the roads immediately to prevent re-offending.

In NSW, police can confiscate number plates at the roadside or impound the vehicle if they detect a driver committing certain high-risk offences. This includes ‘hoon’ offences, such as street racing, engaging in a police pursuit or speeding by more than 45km/h over the limit.

More information on the vehicle sanctions scheme is available on the Transport for NSW website.